Predicting the future at the Propel Venture Partners Summit 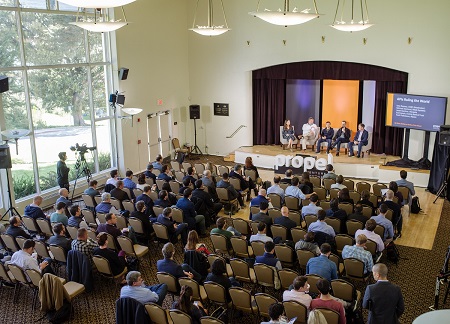 Each year Propel Venture Partners holds an annual summit for the businesses it invests into through it’s single limited partner, BBVA. The event in Silicon Valley is a chance for updates, shared learnings, introductions and to discuss the kind of technology and drivers that will shape the sector in the coming years.

Over the past few years Propel has also shifted the direction of the conference, so that while some of the startups speak and share their thinking, the event also brings in guests to share insights on specific areas too.

For example, this year, one of the areas focussed on was the impact that the shared or gig economy is having in regions like Latin America. Those speaking on the panel spoke about areas of growth where technology platforms, especially when linked to mobile devices, are increasingly supporting like in job creation.

One of those was Pedro Medina, the CEO of Lana within Cabify, who described how for businesses like Cabify and Uber, Latin American companies topped their list of cities where most of their rides occur – Sao Paulo and Rio taking the top spots.

The panellists, including Adam Roseman, co-founder and CEO of Steady and Deepa Mahanjan, Patner at McKinsey, also covered other areas where the shared economy is being changed by technology.

For reference, the speakers highlighted how across Latin America where technology platforms were enabling the formation of communities of gig economy, or single workers, it was allowing for scaled leverage for members on areas like health insurance, and ensuring individual workers could benefit from the kind of advantages those working for big business can get.

The conference also saw predictions being made around how the digital transformation of work would continue to change the ways businesses and people worked. One core theme centred around the way that technology will increasingly enabler smaller groups of people, perhaps even single individuals, to run large complex digital businesses thanks to connectivity and increasingly autonomous software.

Another session featured the two most senior content and programme directors for the worldwide Money20/20 series of conferences, Global Content Director Pat Patel, and Director of Content for Asia Rebecca Martin. Between them the pair explained how Money 2020 had grown to four conferences a year (US, Europe, Singapore and China) in less than a decade and now had more than 25,000 annual attendees. Sharing the insights gained from the events, Patel and Martin described how there were definitely trends seen that differed in the regions around the innovations being built. In Asia for example, there was a strong drive on areas like payments and connecting networks, while in Europe and Israel the focus was more around things like AI powered personal finance managers and data management tools.

Asked what they thought made the best pitches and content, they said the biggest thing was being able to see the genuine passion the leaders had, and then particularly businesses that went after counter intuitive narratives, and that tried to change the landscape.

They particularly highlighted BBVA and its Executive Chairman Carlos Torres Vila for his focus on digital transformation and the use of data. That last element, for many at the conference, resonated strongly, with the 250 or so attendees unanimously in favour of BBVA’s view that the customer owns their data, and accordingly should then be free to share it with whomever they want, where they want and across sectors.